Posted by Ken on January 15, 2012 in Belief systems, Get Off the Sidelines, Ken's Blogs, Love versus Fear 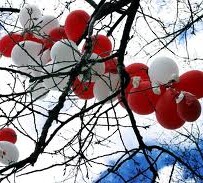 How do you plan a victory party?

A little over a year ago there was a municipal election in our city. I heard a few people walking around saying they really wanted change in the position of Mayor. Others were saying that they thought the existing mayor was doing a good job and hoped he would get back in. I took my stance as well. Then someone asked me if I was going to sit back and let things happen or if I was going to stand up for my beliefs and do something about it. They added that you’ll have no right to complain later if you do nothing to try to affect the outcome the way you’d like to see it.

So I did. I got involved. I remember sending messages out to my e-mail distribution list about 2 or 3 times a week. My theory was that they may or may not read the first, or the second, or even the third message, but when they got to the 4th and 5th message they might think “I’ve heard this somewhere before”. My hope was to really make a difference in getting people out to vote (priority 1) and hopefully vote for the candidate I supported (priority 1a). I went door-to-door in some areas of town to help try to get the voters to vote and I even wore 4 or 5 supporter pins on my jacket and really did my best to make a difference.

In the meantime, all candidates were planning their victory party for election day. They all have to plan one just in case they win, because the news reporters are going to be there to cover the story. It seemed that the sheer act of planning this victory party made it seem more real and gave the campaign a sense of “hey, this can happen.”

The funny thing was that I never really heard back from many people with my email campaign and only a few people acknowledged my buttons on my jacket. There might have been a lot of people liking my messages and sharing them with their friends, but I only heard from a few that were. There wasn’t even that much feedback from neighbours when I knocked on their door. I started to wonder if I was making a difference, would it be all for naught, would I be attending the victory party of the victor, or would I be at the party where the news reporters stopped 2nd to say “you put up a good fight”? There was no way to know, but I just kept doing whatever I could to help.

Fast forward to election day, and I attended the victory party for the winner, still not knowing if my efforts had made any impact. But it really didn’t matter if I knew, did it? The time was right for a fresh start, and that’s what really mattered.

Lately I’ve been thinking about a different campaign that I’ve chosen to get involved in. I’ve been reading and hearing a lot about crisis in our communities and in the world. There is climate change discussion (crisis), illness and dis-ease is rampant (crisis), and there is war and unrest topping our newscasts on many nights (more crisis?). That’s the bad news. The good news is that there seems to be even more discussion about how we can make a difference, things that we all can do to make our communities and our world a better place.

I just watched a great movie called “I Am”, from Tom Shadyac, the same director who did “Ace Ventura”, “Bruce Almighty”, and other successful movies. In “I Am”, he talks about what’s wrong with the world, but he also goes on to talk about what’s right. And in the end, he leaves the challenge to everyone to understand that they’re not too small to make a difference. I won’t go into detail about the movie in case you haven’t seen it, but if you’re at all unhappy with how things are going, I would consider this a “must see”. And after watching it, decide for yourself if you think there’s anything you can do to make a difference.

So that’s it. I’m stepping up to the plate to get involved in the next campaign. I’ll send out blogs to people and maybe they’ll read them and share them with their friends. I’ll stop people on the street, heck I may even go door-to-door. But I won’t look back and say, “Bummer of a result, wish I had got involved.”

Oh yeah, and that victory party. I’ve got the date. December 21st, 2012 is getting a lot of attention lately. Let’s do it then. Let’s celebrate a fresh start. Does anybody out there know how to plan a really big victory party? Maybe I’ll see you there.