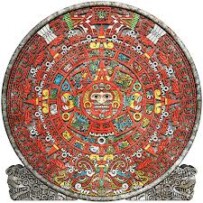 Have you seen the movie by the same name? Do you think the world is coming to an end in December? For those familiar with the Mayan calendar, do you think the Mayans simply ran out of rock to write things down on (that’s an attempt at humour, I’ve seen a cartoon to this effect and loved it – probably loses a bit in translation without seeing the picture – loses even more if you’re not familiar with the Mayan calendar)? Do you think nothing will happen?

From a scientific perspective we know that several of the planets are going to come into alignment on December 21st, 2012 for the first time in several thousand years. There is also scientific and archaeological evidence that the earth has gone through many cycles to date, and the Mayan calendar seems to indicate that December 21st, 2012 marks the end of another cycle. You’ve probably heard the song “The Age of Aquarius”, that’s related to the upcoming date. I’ve also heard many people talk about the upcoming Golden Age that starts right after the winter solstice on December 21st. My sense is that nobody really knows what’s going to happen, but there do seem to be a lot of people that I know that are talking about it.

So what do you think?

I certainly don’t have any idea, but I have decided that I have a dream of what it might be. This may or may not resonate with you, but this is how I hope to see things pan out. Some of you may think that there’s no way this could happen that quickly. That’s okay, it’s my dream, it doesn’t have to be yours.

The biggest part of my dream is seeing the dawning of a brand new era, a transformation. There are so many things I would like to see the end of, and I love the idea of looking forward to an upcoming Golden Age. I see a much more cooperative world, and a much more balanced world. It won’t be about the haves and the have nots, it will be about people working together as parts of communities. Companies will be formed and operated based on serving the greater good, not based on making the most money for the few that run the companies with no concern for whether their products are harming the general public or not. I see the eradication of dis-ease, finding and dealing with root causes, not just the masking of symptoms.

Lofty, eh? It may be lofty, but that’s okay. Without having lofty dreams, one is only striving for mediocrity.

I was on a course today and have to share this writing that was given to me. The author is Samarah Riely and she was pleased that I would include this. Here is what I hope to see leave us as part of the END OF AN AGE.

“Throughout our history, there have been very dark periods. The pursuit of personal gain and the accompanying abuses of power have left us a planet and a population exhausted and depleted and often dissolute. … We have allowed ourselves to be deceived and misled and sold into a kind of “coco-coma” as Andrew Harvey calls it. We eat what has been processed beyond any nutritional value and then wonder why we are still hungry. So we eat more and more and now obesity is rampant and we are still hungry.

Our physical body is a miraculous creation that uses a kind of alchemy that can transform food into new cells and fuel us with energy and life force. How many people today complain of chronic fatigue and can barely make it home to dinner and the dulling opiate of television or the internet? Where does our life force go and how can we change the equation so that we again are blossoming and thriving rather than fading and dying?

It is time to really notice what we are putting into our bodies and to choose what creates vibrant health and strength.

Our mental bodies are suffering as well from the demeaning early conditioning of not being good enough or smart enough or pretty enough. Turn on the TV or internet and look at what is touted as success. We have glorified multimillion dollar athletes who beat their wives or trade them in for younger models; we admire tycoons that have made their millions on the backs of others; and we idolize starlets whose bodies have been shaped by surgery and whose eating disorders and addictions regularly land them in rehab.

Money, power and a false kind of cosmetic beauty are the models we see as society’s badges of success. How can the average person compete with that? And that too is the issue. The model is of competition and winners being on top of someone else. We have glorified the conqueror and the martyr.

The emotional body holds all the disappointment and shame of not living up to whatever the idea of success imposed on us would be. We carry the patterns of betrayal and conciliation and then we do not dare to speak up or ask for something different. We try to “make the best of it”, “keep a stiff upper lip”. We tell ourselves that lots of others are much worse off until we have locked away our essence and our power and then we shrug our shoulders and reach for the remote or the keyboard or the cocktail.

Does any of this resonate with you? Could you find yourself looking forward to the dawn of a brand new Golden Age?

In Part 2 next week I will share some of my thoughts and dreams of beginning this transformation.

P.S. Health-tember  is coming, just over a week away. Will you use September as a month to focus on happiness and health? Check it out, get involved.