Home » Get Off the Sidelines » Are You A Lemming | Will You Just Run Off the Cliff or Stop and Think for Yourself?

Are You A Lemming | Will You Just Run Off the Cliff or Stop and Think for Yourself? 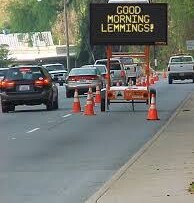 A crazy thought came into my mind this week about the similarities between lemmings and people. Do you remember the lemming story from when you were growing up? My first thought was to go to Wikipedia and look it up, then I realized that it would be better to go from memory. In early grade school, I was taught that for some reason, lemmings all gather together at some point and run off the edge of a cliff to their deaths. I don’t remember if there was an explanation as to why, I just remember this part of the story.

This week I got to thinking that a lot of humans are doing the same thing. Many are simply following the masses unquestioningly, and there’s an argument to be made that they are following those masses to the edge of a cliff, ready to plunge to their certain deaths.

I also have this crazy cartoon image in my mind of millions of lemmings running toward a cliff, and one of them stands up very conspicuously, and the bubble thought pops up above his head “Where are we going, and why?” In the next frame a few more stand up with the same thought.

This seems strikingly close to humanity. We follow along, believing what we’re told unquestioningly, and run off the cliff. The good news is that there are a lot of those “one off” lemmings that are starting to ask why.

This is but a small sampling of practices that are happening with our food supply, seemingly primarily influenced by the ability to generate the greatest profit for food manufacturers. A few questions come to mind for me. If there is so much controversy around these practices, who are the people marking the products as “considered safe”? If other countries are banning products, what do they know that we don’t seem to know? Are the people in charge of our food supply really acting in our best interests?

It can also be argued that we have been lemmings in how we see and utilize our health care system. For many people, when symptoms arise they see a doctor and often walk out with a prescription drug to treat the symptoms. In our desire to deal with symptoms quickly, we rarely take the time to consider the root cause of the symptoms. While many conditions could have been traced back to stress-related issues in a person’s life, this exercise often is left uncompleted because the symptoms “went away” with the prescription drug. But if the root cause doesn’t get treated, symptoms often return or show up in different ways. The process gets repeated and another prescription drug gets dispensed. In a desire to deal with the symptoms quickly, the side effects of the prescription drug are often not even considered. While there is lots of evidence indicating that we can figure out root causes of many conditions and treat them with lifestyle changes, the desire for quick-fix solutions has turned us into a society of habitual pill-poppers.

Is it time to start asking questions?

I was a lemming. In 2008, I was diagnosed with an autoimmune disease called rheumatoid arthritis. My doctor told me that diet did not have an impact and that the only solution was a cocktail of chemotherapy drugs. And I believed everything she told me. I didn’t look for root causes, I started the drug cocktail. Then one day as my hair started falling out (that wasn’t supposed to happen for the low dosage of chemotherapy drugs I was on), this bubble popped above my head “Where am I going and why?” I’m not a lemming any more. I may still fall off a cliff one day, but it will be along a path of my choosing, and I will have asked a lot of questions along the way.

Oh yeah, the last frame of that cartoon collage features the first annual Lemming Hall of Fame induction ceremony with a single inductee and the caption reads “He wasn’t afraid to stand out. He stopped and asked why. Without him, we wouldn’t be here today.”

Are you a lemming? Are you going to keep following the masses or are you going to stand up and ask questions? Psst, I’m gonna let you in on a little secret. The people that are standing up and asking questions just might be “the masses”.

How else do you think we are acting like lemmings? I’d love to hear your thoughts in the Comments section below.