The Elephant in the Room | A Story of Synchronicity

Posted by Ken on March 21, 2013 in Expect synchronicity, Ken's Blogs 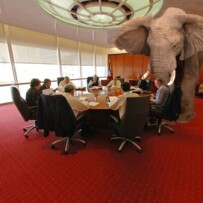 Have you ever had a week where random, yet similar events keep happening and it forces you to pause and take notice? Maybe you keep seeing the same animal, or you keep seeing feathers, maybe a few people have made the same comment. It may well be simply a coincidence, it may be synchronicity.

“Synchronicity is the experience of two or more events that are apparently causally unrelated or unlikely to occur together by chance, yet are experienced as occurring together in a meaningful manner. The concept of synchronicity was first described in this terminology by Carl Gustav Jung, a Swiss psychologist, in the 1920’s. The concept does not question, or compete with, the notion of causality. Instead, it maintains that just as events may be grouped by cause, they may also be grouped by meaning. A grouping of events by meaning need not have an explanation in terms of cause and effect.”

I’d like to share my story of synchronicity this week to see if it resonates with you.

For the past several months, I seem to keep seeing elephants. I’ll see them on FaceBook posts, people will have pictures or paintings in their house. For a while it was happening so much that I mentioned it to a colleague who suggested I should do a Google search on the “spiritual significance of elephants”. There was a time I would have raised my eyebrows, looked away and changed the subject because this seemed like a crazy idea. However, I have spent the last few years exploring the concept of the mind-body-spirit connection as it relates to physical and emotional healing, and have become much more open-minded to this type of suggestion. So I looked it up and got the following: “Symbolic elephant meaning deals primarily with strength, honor, stability and patience“. That seemed kinda cool, but I didn’t give it much more thought. … Until this week.

On Monday I was on my way to meet a friend for coffee. As I parked the car, there was an email indicating a comment on last week’s blog. The comment related my post about the current health care system being “the elephant in the room”, something we can’t ignore any longer.

Then as I met my friend, the second sentence out of her mouth was “ok, let’s deal with the elephant in the room”. I didn’t even let her finish as I laughed out loud and shared how I had seen that comment about 5 minutes ago. After the meeting, I came home and wrote a post in a FaceBook group sharing this story and we had a few good laughs and a few interpretations of what the symbolism might be. More on that in a moment.

Yesterday, I met a client in his office and as soon as I sat down, I noticed a picture of an elephant sitting on his credenza. What? Really? Cue Twilight Zone music. I couldn’t help but share the story with the client.

This morning I was on FaceBook and the second or third feed was a book review for a book entitled … wait for it … “The Elephant in the Room“.

For me, my interpretation at the moment is that it’s more about the significance of the “elephant in the room” than it is about the “elephant” in and of itself.

“Elephant in the room” is an English metaphorical idiom for an obvious truth that is either being ignored or going unaddressed. The idiomatic expression also applies to an obvious problem or risk no one wants to discuss.

It is based on the idea that an elephant in a room would be impossible to overlook; thus, people in the room who pretend the elephant is not there have chosen to avoid dealing with the looming big issue.

And the truth is that there is. Actually there are two of them. And it is time to face them both. I can’t ignore them any longer. I don’t have to have all the answers in the immediate moment, but I do have to stop ignoring them.

What about you? Is there an elephant in your room? Or are you experiencing moments of synchronicity that you just can’t ignore?

Have some fun with it. Explore it a bit. There may be more than one possible meaning. Which one resonates with you the most?

I’d love to hear your thoughts in the Comments section below.